City Drivers Own Three Quarters of all SUVs Sold in UK

According to the Collins English Dictionary, an SUV (sports utility vehicle) is a “powerful vehicle with four-wheel drive that can be driven over rough ground”.

Equipped with four-wheel drive and high ground clearance, these rugged vehicles are an undoubted necessity in some parts of the world, and even some parts of the UK, where going about your daily business involves driving along unmade rocky roads, across muddy fields, over rivers, up hills and down dales.

However, when you think of the sort of terrain that an SUV was designed to conquer, the pampered streets of Kensington & Chelsea really shouldn’t be what spring to mind. But these vehicles have earned the ‘Chelsea tractors’ nickname for a reason.

Here at H2 Property Services we have a great team on hand, including plumbers, electricians, gas, boiler and central heating engineers – available across London.

As well as being unnecessarily large (a Mercedes Benz GLS 2020, for example, is over 2 metres longer and over half a metre wider than a traditional Mini), SUVs are among the least environmentally-friendly vehicles you can buy and are twice as likely to kill a pedestrian in a collision than smaller cars.

You would hope, in this world of climate change, fuel scarcity and congested urban roads, that people would make a more sensible choice when it comes to buying their latest vehicle.

However, a recent report published April 2021, has suggested that something like 75% of all SUVs sold in the UK are registered to people living in our towns and cities. And the areas with the highest percentages of all are affluent London boroughs Kensington & Chelsea, Hammersmith & Fulham and Westminster. On average, roughly a third of all new private cars bought in these areas are large SUVs. 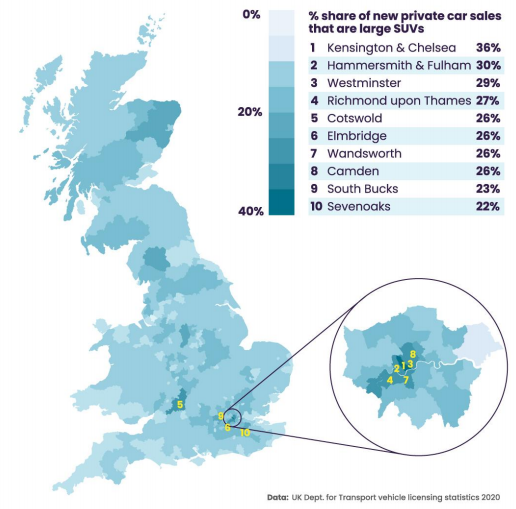 So, rather than enabling the crossing of inhospitable terrain, our SUVs are mainly being used to take the kids to school and pop down to the shops.

There is another way

Most new SUVs are hybrid vehicles, but because of the way they are being used (short journeys in heavy traffic), they are actually being driven with zero emissions less than a third of the time. If government targets for zero emissions by 2050 are to be met, at some point we’re going to have to change our car-buying habits.

Alongside this inexorable rise of the SUV, we are thankfully also seeing a rise in the number of genuine electric cars, and there are a number of government schemes that are making it easier to own and run them. If you have a fully electric car and need a EV charger, an OZEV authorised installer such as H2 Property Services can provide and install a charge point and you could benefit from a £350 grant from the government towards the cost.

No matter if you need an EV charger for your home or workplace, our trained electricians can install one that best suits you.

Our electric charging point installation service is bringing the means to charge an environmentally-friendly alternative to the SUV to homes and businesses across London.

← What are the Benefits of Electric Vehicles? |

Or send us a message with our contact form.

During the Covid-19 outbreak, H2 Property Services is carrying out all services for our clients strictly following Public Health England guidelines.

Our plumbers, electricians and gas engineers are working throughout this period to be there for you when you need us.